On Monday a project that I've been working on was officially announced as part of a larger privacy initiative called Polaris. In case you missed it, there is an experimental tracking protection feature in Firefox Nightly that allows people to avoid being tracked by not communicating with known tracking domains, especially those that do not respect DNT. Our initial blocklist is from Disconnect. As a side effect, blocking resources from tracking domains speeds up page load times on average by 20%. Privacy features rarely coincide with performance benefits, so that's exciting.

Currently, tracking protection is available by turning on browser.polaris.enabled in about:config. If you care about privacy in Firefox and are running Nightly, please give it a try. Requiring about:config changes is quite onerous, but we need your feedback to improve tracking protection. You can read official instructions on how to turn on tracking protection or see the animated gif below (original slide deck here for people who like to advance manually).

Many thanks to everyone who helped get this landed, especially my awesome intern, Georgios Kontaxis, and the team at Disconnect for open sourcing their blocklist.
Posted by Monica at 5:41 PM 14 comments:

It is challenging but possible to make decisions with limited data. For example, take the rollout saga of public key pinning.

To enable safer rollouts, we implemented a test mode for pinning. In test mode, pinning violations are counted but not enforced. With sufficient telemetry, it is possible to measure how badly sites would break without actually breaking the site.

Due to privacy restrictions in telemetry, we do not collect per-organization pinning violations except for Mozilla sites that are operationally critical to Firefox. This means that it is not possible to distinguish pinning violations for Google domains from Twitter domains, for example. I do not believe that collecting the aggregated number of pinning violations for sites on the Alexa top 10 list constitutes a privacy violation, but I look forward to the day when technologies such as RAPPOR make it easier to collect actionable data in a privacy-preserving way.

Fortunately for us, Chrome has already implemented pinning on many high-traffic sites. This is fantastic news, because it means we can import Chrome’s pin list in test mode with relatively high assurance that the pin list won’t break Firefox, since it is already in production in Chrome.

Given sufficient test mode telemetry, we can decide whether to enforce pins instead of just counting violations. If the pinning violation rate is sufficiently low, it is probably safe to promote the pinned domain from test mode to production mode.

Because the current implementation of pinning in Firefox relies on built-in static pinsets and we are unable to count violations per-pinset, it is important to track changes to the pinset file in the dashboard. Fortunately HighStock supports event markers which somewhat alleviates this problem, and David Keeler also contributed some tooltip code to roughly associate dates with Mercurial revisions. Armed with the timeseries of pinning violation rates, event markers for dates that we promoted organizations to production mode (or high-traffic organizations like Dropbox were added in test mode due to a new import from Chromium) we can see whether pinning is working or not.

Telemetry is useful for forensics, but in our case, it is not useful for catching problems as they occur. This limitation is due to several difficulties, which I hope will be overcome by more generalized, comprehensive SSL error-reporting and HPKP:

Despite all the caveats and limitations, using these simple tools we were able to successfully roll out pinning pretty much all sites that we’ve attempted (including AMO, our unlucky canary) as of Firefox 34 and look forward to expanding coverage.

Thanks for reading, and don’t forget to update your Nightly if you love Mozilla! :)
Posted by Monica at 7:00 AM No comments:

Public Key Pinning helps ensure that people are connecting to the sites they intend. Pinning allows site operators to specify which certificate authorities (CAs) issue valid certificates for them, rather than accepting any one of the hundreds of built-in root certificates that ship with Firefox. If any certificate in the verified certificate chain corresponds to one of the known good certificates, Firefox displays the lock icon as normal. 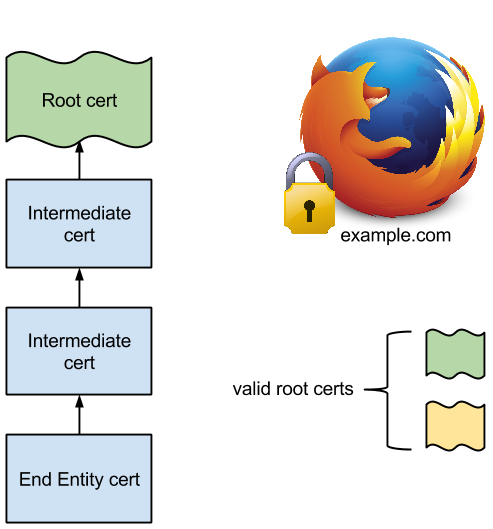 Pinning helps protect users from man-in-the-middle-attacks and rogue certificate authorities. When the root cert for a pinned site does not match one of the known good CAs, Firefox will reject the connection with a pinning error. This type of error can also occur if a CA mis-issues a certificate. 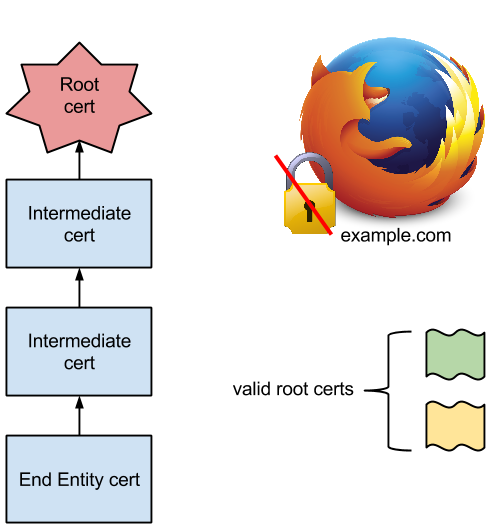 Pinning errors can be transient. For example, if a person is signing into WiFi, they may see an error like the one below when visiting a pinned site. The error should disappear if the person reloads after the WiFi access is setup. 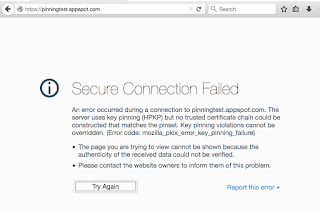 Firefox 32 and above supports built-in pins, which means that the list of acceptable certificate authorities must be set at time of build for each pinned domain. Pinning is enforced by default. Sites may advertise their support for pinning with the Public Key Pinning Extension for HTTP, which we hope to implement soon. Pinned domains include addons.mozilla.org and Twitter in Firefox 32, and Google domains in Firefox 33, with more domains to come. That means that Firefox users can visit Mozilla, Twitter and Google domains more safely. For the full list of pinned domains and rollout status, please see the Public Key Pinning wiki.

Thanks to Camilo Viecco for the initial implementation and David Keeler for many reviews!
Posted by Monica at 4:15 PM 25 comments:


Did you know that the estimated cost of malware is hundreds of billions of dollars per year? Even without data loss or identity theft, the time and annoyance spent dealing with infected machines is a significant cost.

In preliminary testing, this feature cuts the amount of undetected malware by half. That’s a significant user benefit.

What happens when you download malware? Firefox checks URLs associated with the download against a local Safe Browsing blocklist. If the binary is signed, Firefox checks the verified signature against a local allowlist of known good publishers. If no match is found, Firefox 32 and later queries the Safe Browsing service with download metadata (NB: this happens only on Windows, because signature verification APIs to suppress remote lookups are only available on Windows). In case malware is detected, the Download Manager will block access to the downloaded file and remove it from disk, displaying an error in the Downloads Panel.


How can I turn this feature off? This feature respects the existing Safe Browsing preference for malware detection, so if you’ve already turned that off, there’s nothing further to do. Below is a screenshot of the new, beautiful in-content preferences (Preferences > Security) with all Safe Browsing integration turned off. I strongly recommend against turning off malware detection, but if you decide to do so, keep in mind that phishing detection also relies on Safe Browsing.

Many thanks to Gian-Carlo Pascutto and Paolo Amadini for reviews, and the Google Safe Browsing team for helping keep Firefox users safe and secure!
Posted by Monica at 5:00 PM 10 comments: