However, this view is reductive! To illustrate, compare the risk of having unintended MS Word settings with having unintended Facebook settings. Both applications will probably continue to function, but one is much more likely to surprise and dismay the user. Thus, users are more highly motivated to change social network settings than editor settings. In fact, according to Pew, 71% of people under 30 self-report changing their social network settings (and 55% of those over 50 do). Perhaps the lesson here isn't that users never change defaults, but rather that users change defaults when it's important enough for them to do so.

It's not always clear what the default for any given preference or feature should be. When the vast majority of users clearly express a preference for one default over another, then the question is easy. When the split is less one-sided, then choosing a default preference can be fraught. This is particularly true when a substantial minority of users are operating under a drastically different risk model. It is hard for one default set of security and privacy preferences to meet the needs of a heterogeneous user base where one person is concerned about invasive network attacks, and one person is concerned about shoulder-surfing.

Which security and privacy preferences are compelling enough for Firefox users to change? Back in December Ilana Segall from Test Pilot team ran a study measuring those preferences that are exposed in about:config and also in the UI. The population for this study is approximately 12000 users who are on the Aurora and Beta channels, and a relatively small number of users who have opted-in by installing Test Pilot on the release channel. In other words, this population is not representative of the Firefox user base, since nearly all Firefox users are on the release channel. In fact, the Test Pilot population is probably much more likely to change settings in general, since they are passionate enough to test Firefox pre-release.


The dates of data collection were from approximately 12/18/2012 for approximately a week, and includes nearly 12000 users. Here's a series of snapshots of the current preferences UI with no changes to default. The preference as named in about:config is listed on the left, along with the percent of users who changed them.

Obviously, no one touches the default security settings very much. There are at least three plausible, possibly-overlapping interpretations: Firefox predicted the most useful default settings correctly, Firefox is doing a poor job converting user actions into saved preferences, or the population who cares about browser security preferences is really that small. The most frequently changed preference on this tab, signon.rememberSignons, controls whether or not Firefox prompts the user to remember passwords. The question of when or why people use the password manager is complex and I'll save it for a later discussion. It is also interesting that fewer people disable Google SafeBrowsing checks for malware than for phishing (browser.safebrowsing.enabled and browser.safebrowsing.malware.enabled). Presumably these are disabled for privacy or performance reasons. Are users who disable one and not the other making a mistake, or do these users consider themselves phish-proof but not drive-by-download-proof? If it is a mistake, why do we allow users to construct a set of preferences that are internally inconsistent in reasoning? 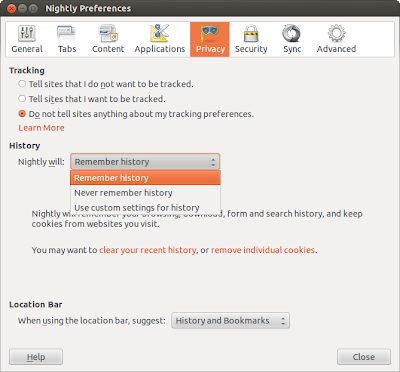 A whopping 11.3% of users enabled Do Not Track (privacy.donottrackheader.enabled). This is an astonishingly high number of users to enable an HTTP header that broadcasts user intent, but is unable to enforce anything client-side. It is a testament to DNT advocates that adoption is this high, but even though this preference is changed by a large minority of users, Firefox should not enable it by default. 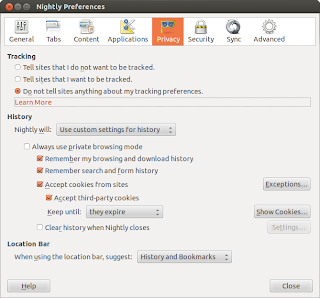 An astute reader will have noticed that there are already two ways to autostart in private browsing mode: using "Never remember history" and checking "Always use private browsing mode" in the screenshot above which automatically disables browsing, download, search and form history. Approximately 5% of users always use private browsing mode (browser.privatebrowsing.autostart). 0.83% of users have modified their cookie settings to be something other than "Accept all cookies," including 7 hardcore users who don't accept cookies at all. One intriguing explanation is that more users are concerned with local attacks (shoulder-surfing or accidental disclosure on shared devices, by people that they know) than remote attacks.

It is troubling that there are two sets of parallel preferences named privacy.cpd (short for clear private data) and privacy.clearOnShutdown that control custom history settings. Both appear to be used in the same way in the code, but Firefox allows users to enter an internally inconsistent states by maintaining multiple sets of preferences for the same functionality.

Finally let's take a look at the "Encryption" settings under the Advanced preferences tab. 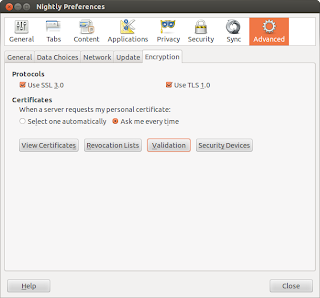 1.75% of users have disabled OCSP (security.OCSP.enabled), and 0.03% of users require it (security.OCSP.require). Without knowing anything about OCSP other than its name and a few recent stories about certificate authorities, a reasonable person might conclude that requiring OCSP by default is a good thing. I am guessing that enabling it by default breaks in some cases. However, with so few people requiring OCSP no one is likely to gather enough implementation experience to require OCSP by default for everyone.

For fun I also measured browser.default.searchenginename, the preference that controls which search engine to use when the string in the location bar is not a URL. This preference probably has the most impact on privacy besides the preferences exposed in the privacy panel. Interestingly, it is modified 43.7% of the time (from chrome://browser-region/locale/region.properties, which is how complex preferences get set). The topmost occurring replacements include Ask, Babylon, and AVG, all of which produce interesting search results when combined with "firefox search" on various search providers. One might question if actual user intent underlies changing such an inaccessible preference so frequently, and if not, what to do about it. That, too is a topic that deserves further discussion.

I'll close with a few open questions for the reader:

Thanks for reading!
Posted by Monica Chew at 10:05 AM

Email ThisBlogThis!Share to TwitterShare to FacebookShare to Pinterest
Labels: mozilla